Achim and Conny have been part of some wonderful spiritual journeys with couples in Germany using Gemeinsam ( German Together resource). They saw some couples taking new steps in their relationships, some travelling into marriage and two men journeying to find Jesus! 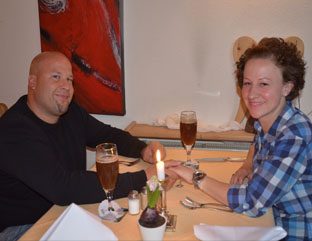 Gemeinsam is a couple’s resource which combines practical relationship tools with Bible study on marriage. Achim and Conny opened their home and provided a relaxed atmosphere and a meal so that couples could get to know each other. Then over coffee they would look at the material together, discussing a different topic at each meeting. In between the group meetings couples talked about more private issues and applied what was relevant for them.

So far Achim and Conny have led two groups. The first consisted of couples of a similar age to them from their church. Conny said: “The atmosphere was very happy and quite open from almost the very beginning. All the group members liked the Gemeinsam book and the meetings a lot and found it helpful for their relationships. One good outcome I would say was that one couple who had different ongoing struggles decided to go to a counsellor weekend which has helped them a lot.”

Their second group was a follow-up to a one day marriage seminar they had helped to organise. Part of this group were Stefan and Petra, and Matthias and Yvonne (couple in the photo).

Stefan and Petra were both divorced and had been living together for a year. At the seminar Stefan decided to pray and ask Jesus into his life. Conny told us: “Then at another prayer seminar in our church God had powerfully spoken right into his new situation. They both are now so active in church and very, very happy about his new life in Christ. They even led the topic on conflict during the group.” Their story doesn’t end there because in August Stefan and Petra got engaged!

During one of the breaks at the one day seminar, Yvonne broke down in tears and told Conny about her longing for her non-believing husband to share her faith in Christ. Conny told us more of the story: “We prayed about it together and God gave us such a confidence that this would happen sometime soon.” The couple decided to join the Gemeinsam group after the event. Conny explained: “ During the group he was always on time and looking forward to it. He was not sharing a lot. Then there was the topic on the power of God. Johanna (who became a believer after a seminar four years ago) shared her testimony with so much power during the discussion! Next week Yvonne told me with so much joy that Matthias had prayed the next morning after the group!!!”

Matthias and Yvonne’s spiritual journey continued significantly three weeks later when they met and prayed with the Pastor of the church they had been going to. Three weeks after that he was baptized!

Achim and Conny are incredibly excited and happy to have been part of these marriage stories. And, the best thing is that the journeys continue…

You can find out more about the Together resource HERE.