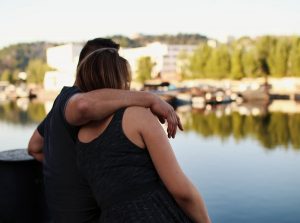 Me, lead a course on relationships? Never!

But I did want to know what the Familylife material was like, so at the Move weekend I went to the seminar introducing their Together course.

The session was very well led and designed to help us understand the participant and leader manuals and how to use them.

The leader’s booklet contains the participants notes on the right and helpful leaders instructions in parallel on the left. There was also a column indicating the time allocated for each section of the study. All of this proved helpful because after a brief introduction to the booklet, we were then given a chance to lead portions of the study in small groups. Not what I expected!

Was I being thrown in at the deep end?!

Well, no, actually! It was scary at first, but it proved very useful. The session we were leading was entitled “Can we talk?” and looked at communication. It addressed different levels of communication, the root of communication problems and how we could grow in trust and openness.

It starts with some introductory reading, which helped set the scene and helped us realise the importance of good communication in a marriage. We then moved on to a case study. It got us talking as we discussed where the couple were going wrong. (I think most of us could identify with parts of it.) And we referred back to it later in the session. We then looked at communicating at different levels with a mixture of diagrams, portions to read and questions to discuss.

Having a go at leading the session really helped me to get my brain round the material and how to use the leader’s notes as we went through. Obviously it would be easier to lead the session if I’d had a good look at it before hand, but the material does lend itself to being used by anyone with a modicum of common sense – you don’t have to be a great speaker or a church leader to make the studies work. The questions were open-ended and encouraged discussion.

Another great thing about the course was the ‘couple time’. You were NOT expected to share your deepest secrets, or anything in fact, about your relationship with your partner during the group discussion time. Each couple is expected to take an hour together to use the guided discussion questions before the next meeting.

Even though we’re not doing the course yet, I’m quite keen to do so. And, who knows, in the next few months we may well pull a group together to go through the Together course – and I may actually lead it!